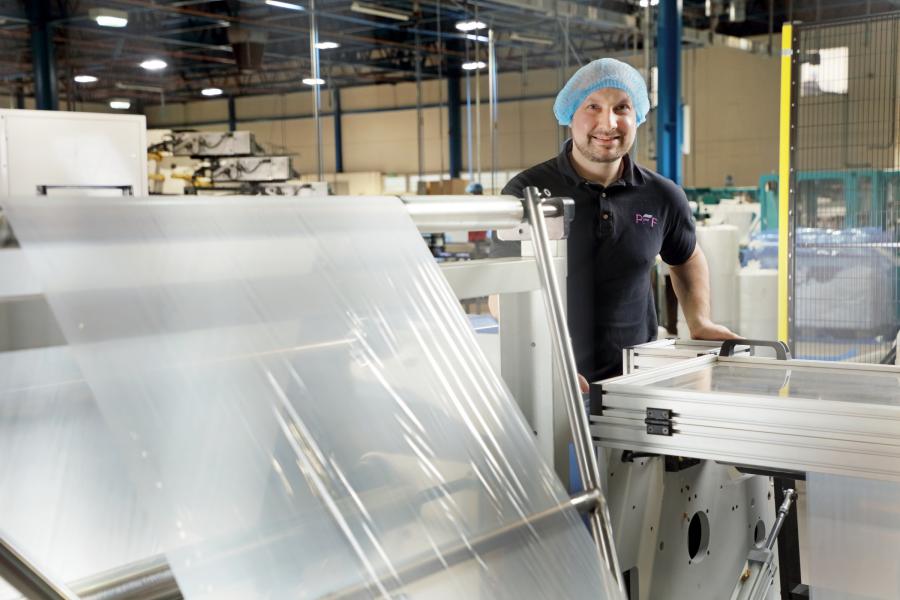 PFF has invested in new folding equipment to speed up production of disposable Personal Protective Equipment (PPE) at our Washington, Tyne and Wear plant.

The new equipment will work alongside PFF’s recently installed custom-built PPE manufacturing machinery and comes on the back of the company’s appointment by the Department of Health and Social Care to produce 360m PPE aprons for frontline NHS and healthcare workers.

The contract has already seen investment in bespoke apron production machines, as well as the establishment of the PFF Health division which is now a member of Made in Britain.

Recognising that a higher volume of the pre-folded film was needed to feed the PPE producing machines than was readily available on the open market, the PFF Group team commissioned new machinery that would speed up the process.

Pictured alongside the new machines, Lee Wilkinson, PFF Group Supply Chain Manager said: “Machine speed is critical to enable us to hit production targets. We were already using 100 tonnes of pre-folded sheet but needed a minimum of an additional 30 tonnes of folded film sheet per week to deliver on the contract. Investing in the new machinery and further staff training has enabled us to fold the sheet ourselves, speeding up production as the new machines are running much faster with output currently at 50 tonnes a week.”