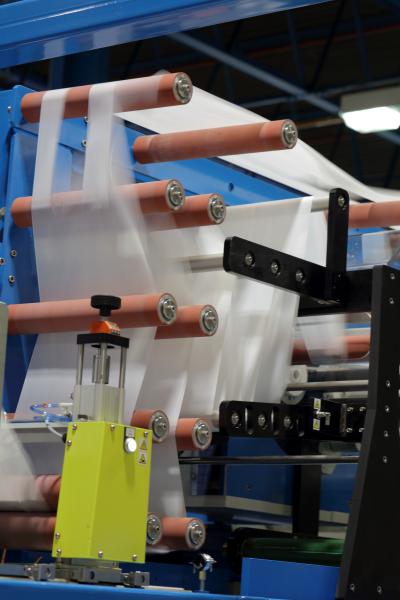 May 2020: “I think I’ve found the company that is going to build our two new machines,” said PFF CEO Andy Bairstow to Group MD Kenton Robbins. And by December, British company Hanbury-Autogil who specialise in autonomous machines for manufacturing had done just that.

Back in April 2020, PFF was appointment by the Department for Health and Social Care (DHSC) to manufacture 360 million disposable polythene aprons to meet the increased demand for PPE.

Industry-standard machines were sourced from South East Asia, a process fraught with challenges even in ordinary times. Air freighting across the world during the height of the first wave of the Covid-19 pandemic was precarious. But ultimately achieved. And suppliers such as Cirrus in Northern Ireland and National Flexible in Bradford played a crucial role in getting polythene and wrapping materials to our site in Washington, Tyne and Wear.

With some 20 machines operating at full capacity, 24/7, Andy and Kenton, engineers themselves at heart, began to look for greater efficiencies. Together with their management team, they scoped-out a blue-print for bespoke software, hardware and processing that would improve the apron manufacturing operation. The result was to be the production of the fastest PPE apron machines in the world.

From the outset, there was a synergy between Andy Bairstow and Hanbury-Autogil Managing Director Robert Hanbury. They collaborated on a mission of smart engineering and material handling. These machines were to be the first of their kind – the ‘best-in-class’ of apron manufacturing machines, with the new line processing two levels of polythene and cutting two at a time.

Additional engineers were taken on at Hanbury-Autogil to join their team of highly skilled engineering experts who would design a robust, dynamic feat of British engineering. The first machine was set up in Washington in December and this milestone occasion was captured through time-lapse photography. The installation team was led by PFF Technical Director Nick Bairstow and included colleagues from the Washington site and specialist engineers from Hanbury-Autogil.

Robert Hanbury said: “We are very proud to be part of this project. Our team showed an incredible work ethic that led to the design of a machine that is clearly the fastest PPE apron machine in the world.”

The significance of two like-minded British-lead companies working together, and doing so during a world pandemic takes courage and total commitment to a project. Ultimately, what a reliable British manufactured supply of disposable aprons means to the UK, the DHSC and UK Government, to frontline NHS and social care workers and the health of our population, to suppliers and the whole supply chain, is immense.

On the strength of apron production and with the development of new PPE in the pipeline, the business has established PFF Health. Experienced health professional Mark Foulger has been recruited as the new division’s commercial director.  PFF Health is going to play a vital role in helping the UK become more self-sufficient in the supply of critical PPE products.